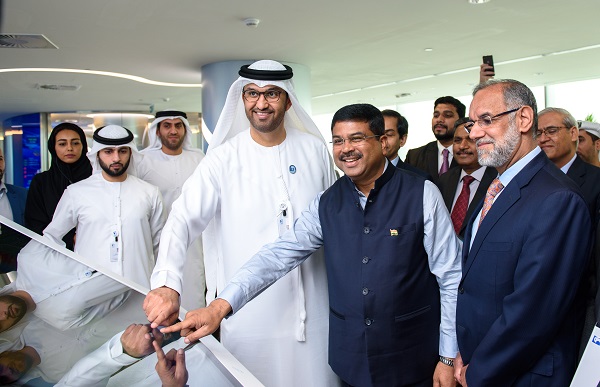 The historic first cargo of two million barrels of crude oil from the Abu Dhabi National Oil Company (ADNOC), destined for the Indian Strategic Petroleum Reserves Ltd (ISPRL) has been loaded and is en-route to India, in the presence of Dharmendra Pradhan, Indian Minister for Petroleum and Natural Gas, and Dr. Sultan Ahmed Al Jaber, UAE Minister of State and ADNOC Group CEO at a ceremony in Abu Dhabi.

The cargo is the first under an agreement between ADNOC and ISPRL, an Indian government-owned company mandated to store crude oil for strategic needs, to locate 5.86 million barrels of ADNOC crude oil at the Karnataka facility in the Indian city of Mangalore.

Dr. Sultan Ahmed Al Jaber, UAE Minister of State and ADNOC Group CEO, said: “The strategic reserve project represents an important new energy partnership with India that leverages the UAE and ADNOC’s expertise and oil resources. With this partnership, new market opportunities will open up for ADNOC, as we not only help to ensure the energy security of the UAE’s largest trading partner, but also gain greater access to one of the fastest-growing markets for high-quality crude oil. Our increased presence in India, will also catalyse demand for our own refined and petrochemical products.”

On February 10, Abu Dhabi awarded an Indian consortium a 10 percent stake in one of its offshore oil concession areas. This announcement is significant as it marks India’s maiden entry into the Gulf’s upstream hydrocarbons sector. The $600 million deal was facilitated by a recent upswing in political ties, following a spate of reciprocal visits by the UAE-Indian leadership and the consequent flow of bilateral ties.

Both India and the UAE are committed to create a $75 billion fund to inject in India’s infrastructure sector that will help India upgrade and expand roads, highways, ports, airports, energy and power sectors.

Dharmendra Pradhan, Indian Minister for Petroleum and Natural Gas, said: “The UAE is the first country to invest in India’s Strategic Reserves Programme. This important partnership will further strengthen the close energy cooperation that exists between India and the UAE and builds on the historic acquisition of a stake in the Lower Zakum offshore concession by Indian Companies.

“The strategic reserve will provide a boost to India’s energy security and help us deal with supply side disruptions. While part of the stored oil will be used for commercial purposes by ADNOC, the major part will be purely for strategic purposes.”

Indian energy demand is forecast, by the International Energy Agency (IEA), to grow by more than any other country in the period to 2040, propelled by an economy that will grow to more than five-times its current size and by population growth that will make it the world’s most populous country. Indian energy consumption is expected to more than double by 2040, accounting for 25 percent of the rise in global energy, and the largest absolute growth in oil consumption.

India is 82 percent dependent on imports to meet its crude oil needs, eight percent of which is supplied by the UAE. In addition to helping to ensure energy security, the oil storage facilities enable ADNOC to efficiently and competitively meet market demand across Asia.

The loading comes the day before ADNOC hosts a major Downstream Investment Forum in Abu Dhabi, where it will unveil more details of its expanded Downstream Strategy, including its new Ruwais industrial hub masterplan.

ADNOC is a major diversified group of energy and petrochemical companies that produces about 3 million barrels of oil and 10.5 billion cubic feet of raw gas a day. Its integrated upstream, midstream and downstream activities are carried out by 14 specialist subsidiary and joint venture companies.